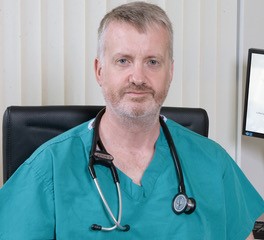 Dr David Begley graduated from Edinburgh University medical school in 1994 and completed general medical training in South East Scotland, achieving full membership of the Royal College of Physicians, before embarking on a career in cardiology. Following several years in research at the National Institutes of Health investigating and treating patients with cardiomyopathy, he returned to the North East of England to complete specialist training in invasive cardiac electrophysiology and devices.

Since 2007, he has been a consultant cardiologist and specialist in cardiac rhythm management at Royal Papworth Hospital in Cambridge, was awarded the degree of Doctor of Medicine in 2009, is a Fellow of the Royal College of Physicians in Edinburgh and completed a Postgraduate Certificate in Medical Education at the University of Cambridge. He has previously been Clinical Lead for Cardiac Rhythm Management at Papworth and is currently Divisional Clinical Director for Cardiology during which time the Hospital has moved from its site in Papworth Everard to a new hospital on the Cambridge Biomedical Campus. His main interests are the treatment and ablation of complex atrial and ventricular arrhythmias.